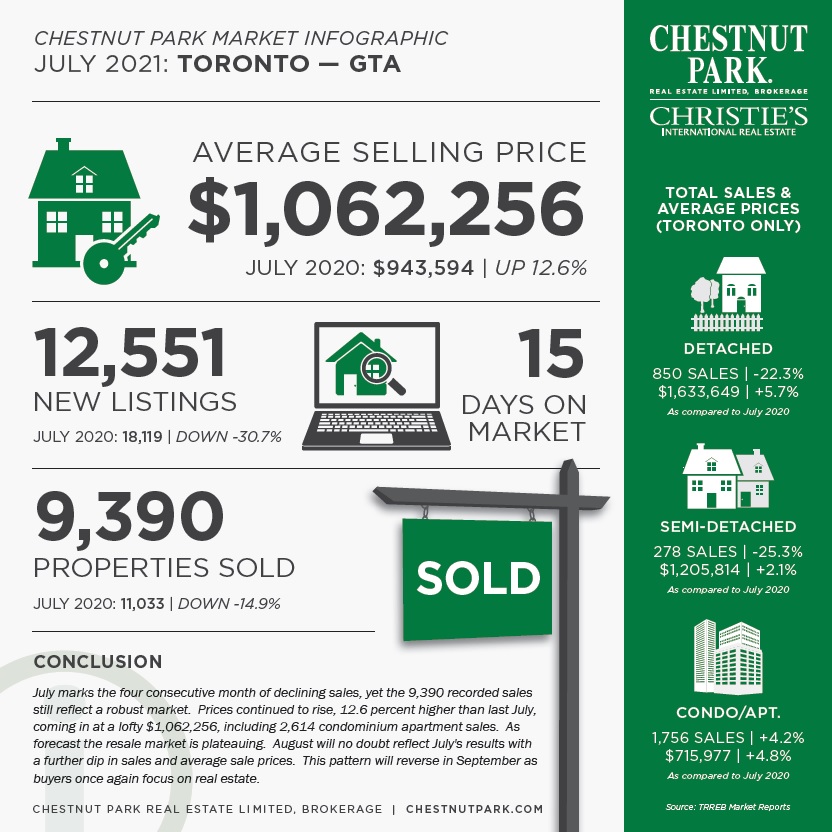 In some ways the July resale market’s performance was anticlimactic. We could see it unfolding in June, and as a result, there were few surprises. Sales continued their decline – in June 11,106 properties were reported sold, dropping to 9,390 in July, but still a strong month by historical standards. The record for reported sales was established last July at 11,081. At the end of the day there are only so many buyers in our given geographical area, and since the beginning of 2021, almost 80,000 properties have changed hands, a pace that will see at least 120,000 sales take place by the end of the year, shattering the previous record of 113,400 sales achieved in 2016.

All market indicators continue to point to a very robust market. The market’s slow down is due to absorption, seasonal change, and with higher vaccination rates and declining social restrictions consumers are focusing on activities other than buying and selling real estate. In addition, even if there was no change in buyers’ attitudes, there simply isn’t enough inventory in the marketplace. In July only 12,551 properties came to market, 31 percent fewer than the number that came to in market last July. As we enter August there are only 9,732 properties available for sale in the entire greater Toronto area, more than 35 percent less than were available last year (15,018).

A closer examination of July’s average sale price indicates the growth in sale prices is taking place in Toronto’s 905 region, and very moderate price growth in the City of Toronto, as the chart below clearly indicates.

The reason for this dramatic differentiation is twofold. Firstly, prices for homes in the 905 region are substantially lower than in the City of Toronto. Affordability is very much at play in the decision-making of buyers. Secondly, the need and desire for more space and perceived more safety, continues to drive buyers away from dense areas in Toronto to the less crowded suburbs. Of the 9,390 reported sales in July, 6,121 traded in the 905 region, or more than 65 percent. This trend is not likely to end soon.

July saw the first overall negative variance in sales in 12 months. Again, it must be remembered that reported sales in July 2020 were record-breaking. Last July 11,033 properties were sold, this year 9,390. July was the fourth straight month of declining sales, which as discussed in our June market report, was anticipated, for reasons already stated – absorption, affordability, lack of supply, and historic seasonal adjustment. Early indications are that this trajectory will continue into August, and for the same reasons. Last August 10,738 residential resale properties were reported sold. This August we will see close to 8,500 properties trading hands. This does not mean that the market is softening. In 2019, which was a solid resale year, 7,682 properties were reported sold. What we are witnessing is the resale market slowly morphing back to pre-pandemic patterns. 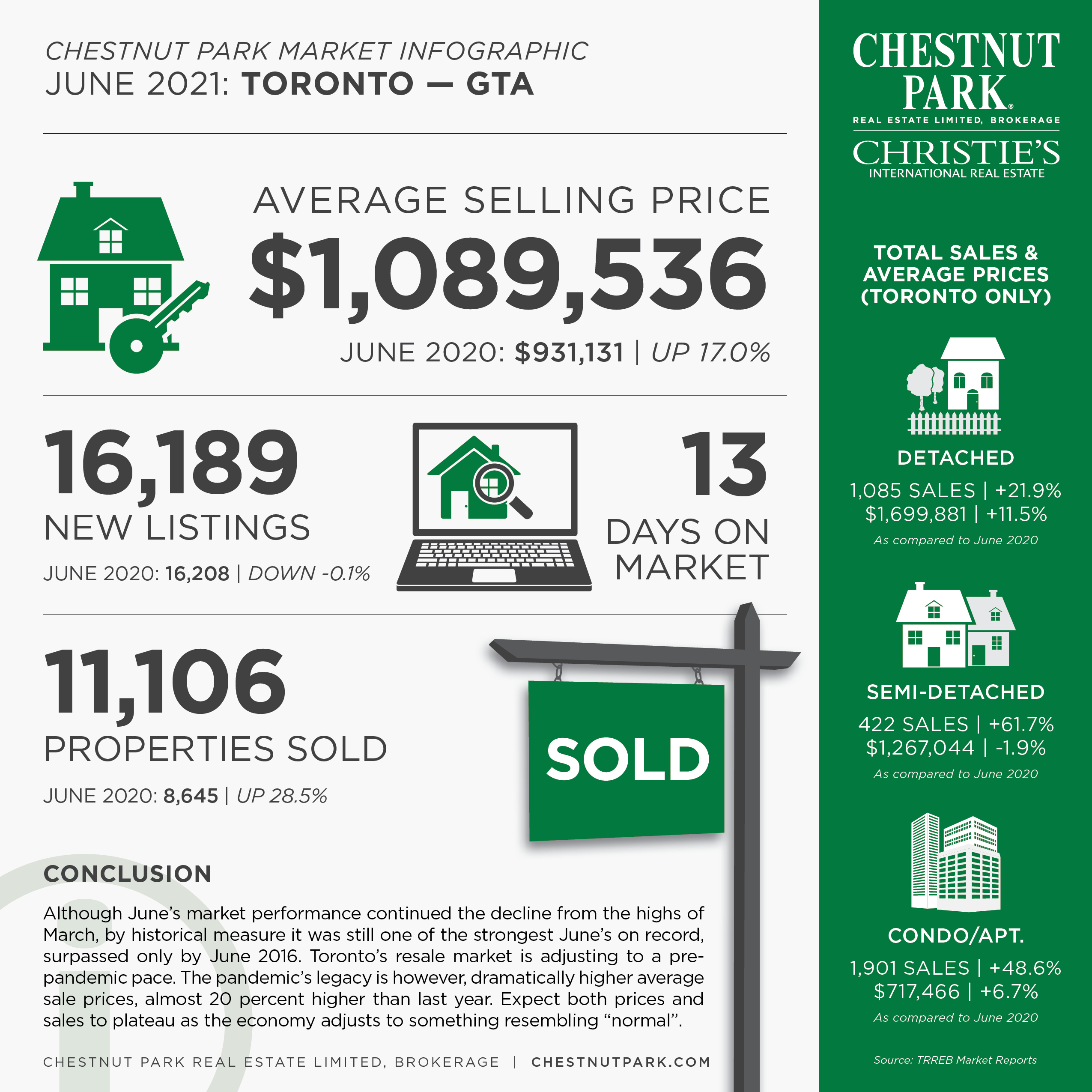 There were 11,106 resale properties reported sold in June in the greater Toronto area. In the City of Toronto 3,850 properties changed hands. In both areas, these numbers were substantially lower than the astronomical peak achieved in March. Having said that, sales activity in June was only outpaced by June sales achieved in June 2016.

The Toronto and area market remains very strong, even though it may feel like it has softened. Peak momentum is clearly now behind us, although some components of the marketplace – ie. condominium apartments and various sought-after neighbourhoods – may resist both the softening of sales and average prices.

Detached and semi-detached property prices in the City remained very robust at $1,700,000 and $1,267,000 respectively. Detached properties increased by 11.5 percent compared to last year, while semi-detached sale prices actually declined by almost 2 percent. This decline was due more to lack of supply than demand.

The high end of the market continued to perform robustly in June. This year 699 properties having a sale price of $2 Million or more were reported sold. Last year only 365 properties were reported sold in this price category, in percentage terms, an increase of almost 92 percent. With an increase in the average sale price of 17 percent, and 2,461 more properties reported sold this June, it is not surprising to see more property sales in the $2 Million plus range. Most of the greater Toronto area property sales are now in the $1 Million to $1.5 Million range.

Price increases were eye-popping in the 905 region. Detached property sale prices increased by almost 30 percent to $1,329,873, while semi-detached property prices increased by 21.5 percent to $915,000. These increases reflect the fact that buyers are continuing to flock to less expensive, ground-level homes, in less dense neighbourhoods. This phenomenon was dramatically accelerated by the concern for space and security (and price) generated by the pandemic.